Our olive grove is situated on steep, terraced hillside and has approximately 350 mature trees. The grove is wrapped around a hill in the beautiful Montalbano area of northern Tuscany. It overlooks the spa town of Monsummano Terme (where Michele grew up) and has spectacular views of the Monti Pisani, the mountain range separating the towns of Lucca and Pisa.

Abandonment and Restoration
Before we took over the olive grove in September 2012, it had lain abandoned for five years. Sadly, this is now a common occurrence. As younger generations turns their back on agricultural work there are fewer full-time farmers left to cultivate the land and many vineyards and olive groves have been neglected or abandoned.

Restoring our grove to its former glory is a time-consuming task which we are completing gradually. When we took over, the olive trees were tall and in desperate need of pruning and the grove was overgrown with weeds and brambles which needed to be cut back. The only advantage of taking over an abandoned grove is that we do not need to worry about pesticides or fertilisers used by the previous farmer, as the field has been untreated for at least 5 years.

Montalbano
Our olive grove is in Montalbano, a small area between Florence and Pisa, in the province of Pistoia. This predominantly hilly area is also known as le colline di Leonardo, and Da Vinci’s birthplace (complete with house and museum) is a ten-minute drive from our grove.

The landscape is a mixture of ancient woodland and cultivated land. As you drive along la Strada dell’Olio e del Vino del Montalbano (‘the Road of Oil and Wine’) and ascend Montalbano’s hills you pass vineyards (largely producing Chianti Montalbano DOC), then olive groves, before finally reaching ancient chestnut forests at the summit (necci – chestnut flour pancakes – are a local speciality).

Montalbano is rich in history and the hillsides are populated by Roman and Etruscan archeological sites, medieval churches and Medici villas. The area roughly corresponds to the Barco Reale, a Medici hunting reserve, and part of the wall remains intact today. 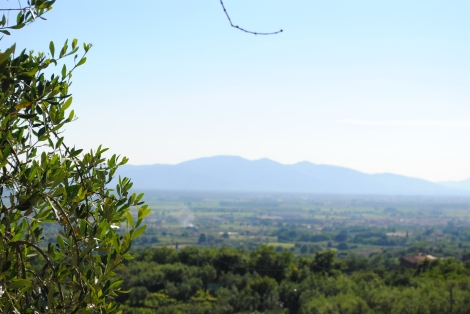 24 responses to “Our Olive Grove”

© Notes from a Tuscan Olive Grove. Unauthorized use and/or duplication of this material without express and written permission from this blog’s author and/or owner is strictly prohibited. Excerpts and links may be used, provided that full and clear credit is given to Notes from a Tuscan Olive Grove with appropriate and specific direction to the original content.
Loading Comments...
%d bloggers like this: